Do you remember the good old days….. 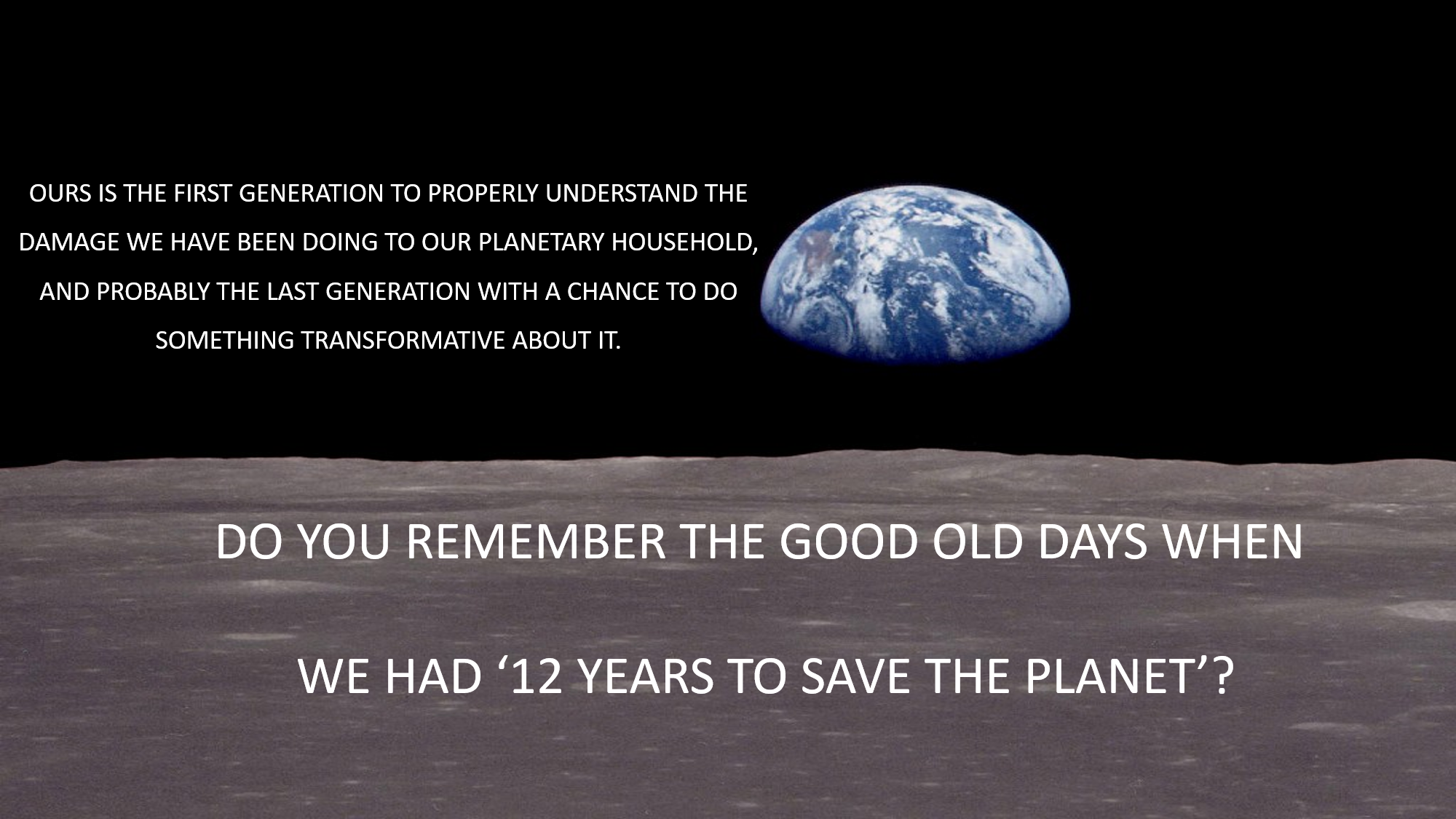 The Anthropocene is a proposed new geological epoch based on the observation that human impacts on essential planetary processes have become so profound that they have driven the Earth out of the Holocene epoch in which agriculture, sedentary communities, and eventually, socially and technologically complex human societies developed. Regardless the formalization of the Anthropocene it is becoming apparent that Anthropocene conditions transgress Holocene conditions in several respects

Social and technological trends and decisions occurring over the next decade or two could significantly influence the trajectory of the Earth System for tens to hundreds of thousands of years and potentially lead to conditions that resemble planetary states that were last seen several millions of years ago, conditions that would be inhospitable to current human societies and to many other contemporary species.

LIMIT CYCLES AND PLANETARY THRESHOLDS. The trajectory of the Earth System through the Late Quaternary, particularly the Holocene, provides the context for exploring the human-driven changes of the Anthropocene and the future trajectories of the system. The physical climate system is subjected to the effects of slow changes in Earth’s orbit and inclination. Over the Late Quaternary (past 1.2 million years), the system has remained bounded between glacial and interglacial extremes. Not every glacial–interglacial cycle of the past million years follows precisely the same trajectory, but the cycles follow the same overall pathway.

The full glacial and interglacial states and the ca. 100,000-years oscillations between them in the Late Quaternary loosely constitute limit cycles (technically, the asymptotic dynamics of ice ages are best modeled as pullback attractors in a nonautonomous dynamical system).

The Anthropocene represents the beginning of a very rapid human-driven trajectory of the Earth System away from the glacial– interglacial limit cycle toward new, hotter climatic conditions and a profoundly different biosphere. The current position, at over 1 °C above a preindustrial baseline, is nearing the upper envelope of interglacial conditions over the past 1.2 million. More importantly, the rapid trajectory of the climate system over the past half century along with technological lock in and socioeconomic inertia in human systems commit the climate system to conditions beyond the envelope of past interglacial conditions. It is therefore, suggested that the Earth System may already have passed one ‘fork in the road’ of potential pathways, a bifurcation, taking the Earth System out of the next glaciation cycle.

In the future, the Earth System could potentially follow many trajectories, often represented by the large range of global temperature rises simulated by climate models. In most analyses, these trajectories are largely driven by the amount of greenhouse gases that human activities have already emitted and will continue to emit into the atmosphere over the rest of this century and beyond—with a presumed quasilinear relationship between cumulative carbon dioxide emissions and global temperature rise. However, biogeophysical feedback processes within the Earth System coupled with direct human degradation of the biosphere may play a more important role than normally assumed, limiting the range of potential future trajectories and potentially eliminating the possibility of the intermediate trajectories. There is a significant risk that these internal dynamics, especially strong nonlinearities in feedback processes, could become an important or perhaps, even dominant factor in steering the trajectory that the Earth System actually follows over coming centuries.

BIOGEOPHYSICAL FEEDBACKS. The trajectory of the Earth System is, as mentioned, influenced by biogeophysical feedbacks within the system that can maintain it in a given state (negative feedbacks) and those that can amplify a perturbation and drive a transition to a different state (positive feedbacks). Some of the key negative feedbacks that could maintain the Earth System in Holocene-like conditions— notably, carbon uptake by land and ocean systems—are weakening relative to human forcing, increasing the risk that positive feedbacks could play an important role in determining the Earth System’s trajectory. Most of the feedbacks can show both continuous responses and tipping point behavior in which the feedback process becomes self-perpetuating after a critical threshold is crossed; subsystems exhibiting this behavior are called tipping elements. The type of behavior—continuous response or tipping point/abrupt change—can depend on the magnitude or the rate of forcing, or both. Many feedbacks will show some gradual change before the tipping point is reached.

For some feedback processes, the magnitude—and even the direction—depend on the rate of climate change. If the rate of climate change is small, the shift in biomes can track the change in temperature/moisture, and the biomes may shift gradually, potentially taking up carbon from the atmosphere as the climate warms and atmospheric CO2 concentration increases. However, if the rate of climate change is too large or too fast, a tipping point can be crossed, and a rapid biome shift may occur via extensive disturbances that can abruptly remove an existing biome. In some terrestrial cases there could be a pulse of carbon to the atmosphere, which if large enough, could influence the trajectory of the Earth System. Varying response rates to a changing climate could lead to complex biosphere dynamics with implications for feedback processes.

HUMAN FEEDBACKS IN THE EARTH SYSTEM. In the dominant climate change narrative, humans are an external force driving change to the Earth System in a largely linear, deterministic way; the higher the forcing in terms of anthropogenic greenhouse gas emissions, the higher the global average temperature. However, human societies and our activities need to be recast as an integral, interacting component of a complex, adaptive Earth System. This framing puts the focus not only on human system dynamics that reduce greenhouse gas emissions but also, on those that create or enhance negative feedbacks that reduce the risk that the Earth System will cross a planetary threshold and lock into a Hothouse Earth pathway.

HUMAN-CREATED PATHWAY. If the world’s societies want to avoid crossing a potential threshold that locks the Earth System into the Hothouse Earth pathway, then it is critical that they make deliberate decisions to avoid this risk and maintain the Earth System in Holocene-like conditions. This human-created pathway represents a Stabilized Earth, in which the Earth System is maintained in a state with a temperature rise no greater than 2 °C above preindustrial (a ‘super-Holocene’ state). Stabilized Earth would require deep cuts in greenhouse gas emissions, protection and enhancement of biosphere carbon sinks, efforts to remove CO2 from the atmosphere, possibly solar radiation management, and adaptation to unavoidable impacts of the warming already occurring.

HUMANITY’S CHALLENGE then is to influence the dynamical properties of the Earth System in such a way that the emerging unstable conditions in the zone between the Holocene and a very hot state become a de facto stable intermediate state. This requires that humans take deliberate, integral, and adaptive steps to reduce dangerous impacts on the Earth System, effectively monitoring and changing behavior to form feedback loops that stabilize this intermediate state.

There is much uncertainty and debate about how this can be done—technically, ethically, equitably, and economically—and there is no doubt that the normative, policy, and institutional aspects are highly challenging. Widespread, rapid, and fundamental transformations will likely be required to reduce the risk of crossing the threshold and locking in the Hothouse Earth pathway; these include changes in behavior, technology and innovation, governance, and values.