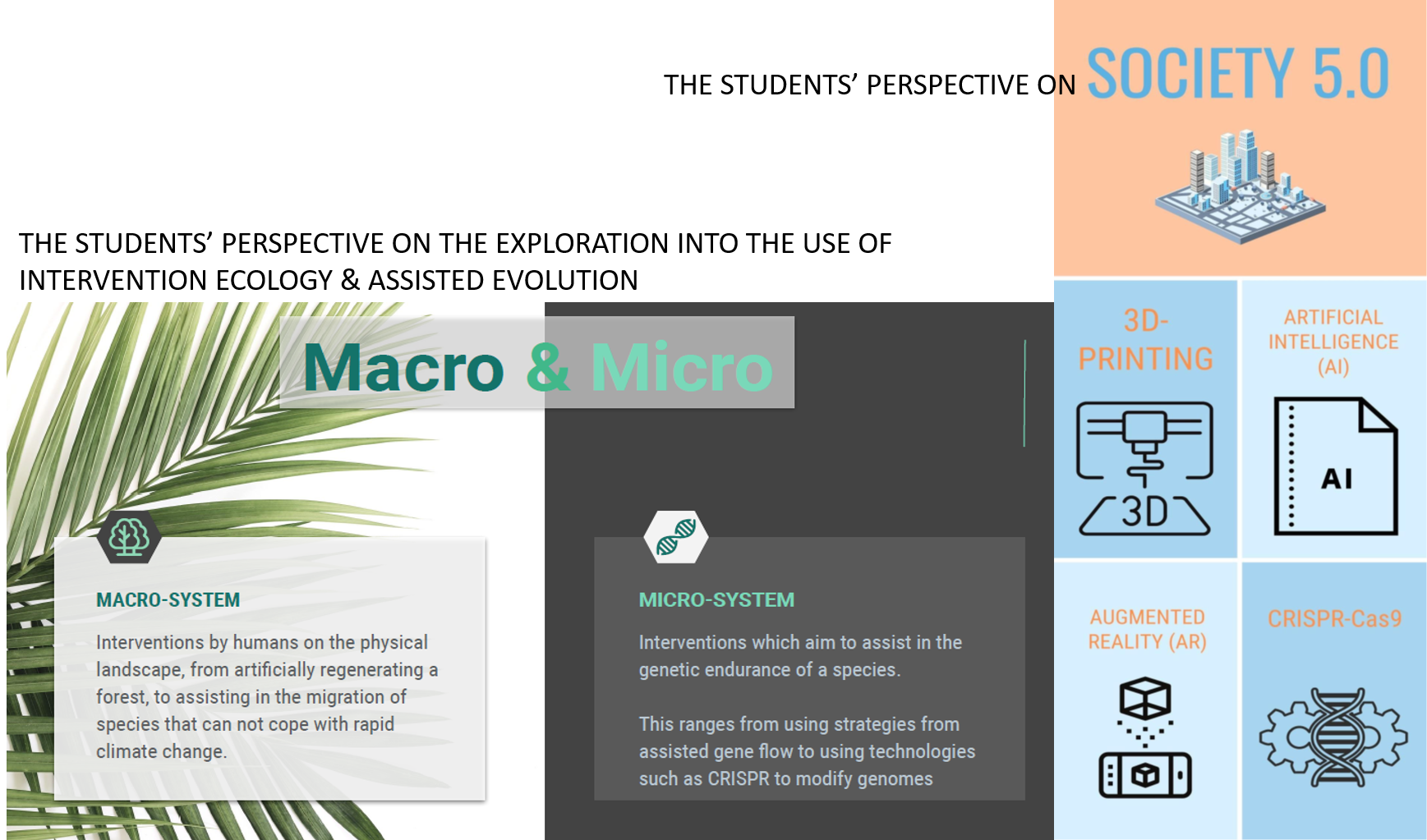 I feel privileged and inspired to support and work with the young people that understand with astonishing clarity the world’s pressing challenges and the passion to help find solutions to them. Working on projects with students from all over the world at the Delft University of Technology, Leiden University, Maastricht University and Wageningen University & Research that bring an incredible range of disciplinary expertise. Bringing people together around a shared ambition amplifies their impact. Two of the latest research projects- an overview-.

students perspective – PERSPECTIVE ON SOCIETY 5.0 -students Maastricht University-
Society 5.0 is considered the next step for humanity, and emerges after the hunter-gatherer society, the agricultural society, the industrial society, and the information society. A society of intelligence, in which physical space and cyberspace are strongly integrated. The possibility of a new human-centered society, in which humans will take a central role in a new, technologically driven society and a society in which the boundaries between real and cyberspace are becoming more blurred.
The concept builds upon 5 pillars: Industry 4.0, Smart City and Mobility 3.0, Humanity 2.0, and ICT 2.0, which are brought together by the fifth pillar—cybernics.
There are numerous ethical questions that an ever-increasing integration of technologies in human life raises: the different ways Society 5.0 may influence human identities. Society 5.0 might profoundly change the way we think about our identities—for example, how we think about the notion of a coherent self— because Society 5.0 will essentially be a society inhabited by both human and nonhuman entities (i.e., technologies; robots, AI, and so on).
For the study the students categorized the evaluative aspect of technologies along two different categories of ethics rather than single values. The two ethical systems are Deontological and Consequentialism. These two systems are often interpreted as dichotomies. Starting with consequentialism, as the term already gives away, this ethical framework mostly considers the direct consequences of actions, or, in our case, technologies. Drawing on utilitarian thinking, consequentialism premises that whenever something produces the greatest amount of pleasure or happiness, then it is the best course of action. Deontological ethics, on the other hand, assesses actions based on whether it is inherently good or bad, no matter the results.
Concerns, emotional reactions, and evaluations about future technologies are incredibly difficult to capture through ‘more standard’ qualitative methods, such as interviews or focus groups, because they, essentially, do not target participants’ creative potential or trigger a creative idea-generation process in thinking about the future. Science Fiction Prototyping is a qualitative method of gathering data that focuses on writing stories about the future. An adequate method to capture students’ different concerns, emotional reactions, and evaluations of future technologies. A way to think humanistically about the technologies they are developing, and to link the imaginations of product developers and future users. This will, in turn, gave insights on how Society 5.0 and technologies can affect human beings in their day-to-day lives.
Thank you Dora, Sabine, Jack, Jeroen, Alexander. It was a privilege working with you.

students perspective- EXPLORATION INTO THE USE OF INTERVENTION ECOLOGY & ASSISTED EVOLUTION -students Wageningen University & Research.
Climate change currently poses a great threat to biodiversity and the functioning of ecosystems. Some foreseen effects of this are habitat degradation, settling of invasive species and a decrease in the distribution of native species. Due to the rapid rate of anthropogenic climate change, some species are not able to ‘catch up’ and evolve at the same rate. This could lead to the phenomenon of ‘mismatching’, where the timing of phases that occur in the life cycles of interacting species changes, potentially having negative consequences on a grand scale. Unprecedented challenges regarding the survival of species and ecosystems will arise, and therefore, new solutions and technologies are needed to tackle this. There are many discussions surrounding the ‘best’ way to protect ecosystems and biodiversity. This report will focus on two such concepts: intervention ecology and assisted evolution. Intervention ecology can be defined as a management tool to assure that ecosystems are adapted to change in climatic conditions by actively intervening in natural processes and structures. Assisted evolution refers to approaches regarding active human intervention (e.g. biotechnology) in order to stimulate the rate of natural evolutionary processes of species by altering species’ genetic structure.
Assisted evolution does fall under the umbrella of intervention ecology strategies, however, the scale to which one intervenes with an ecosystem can vary in this umbrella, therefore, for the purposes of this report, these concepts will be classified based on their scale of intervention: Macro-system and Micro-system intervention ecology strategies. These will respectively entail interventions done on the large scale physical landscape, and interventions done on a smaller, genetic scale. There is an overlap between these scales of interventions, and most techniques fall on a spectrum from using natural principles alone to creating ‘designer’ ecosystems. The report aims to contextualize and explore these concepts to identify the extent to which they could provide feasible alternatives to more traditional restoration methods.
Ecosystems are dynamic and some ecosystems have abundant interactions, of which we are not even aware of in certain cases. Uncertainties is what has brought great concern and every analysis of a potential intervention strategy should not compromise processes, services and feedback of the target ecosystem. Prioritize efforts into protecting and enhancing ecosystem functions through mild intervention strategies and nature-based solutions first. By prioritizing these types of strategies, one can first dive into creative and non-intruding techniques that could avoid risk of putting the whole system off balance. Another key point identified is not only the need to trust nature’s functions, but also the existing genetic diversity of species as the main route towards resilience. By example, optimizing the genetic diversity of areas and promoting the use of native, indigenous and autochthonous species, we would be optimizing the conditions so that species can adapt on their own.
Thank you Ananya, Andrea, Lisa, Mabel, Owen. It was a privilege working with you.