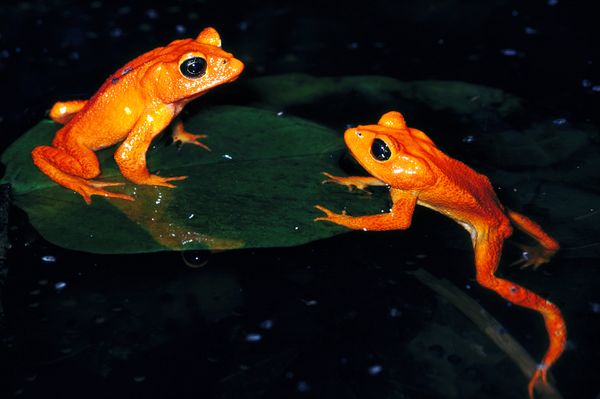 We live amid a global wave of anthropogenically driven biodiversity loss: species and population extirpations and, critically, declines in local species abundance. Particularly, human impacts on animal biodiversity are an under-recognized form of global environmental change. Arguably the most serious aspect of the environmental crisis is the loss of biodiversity—the other living things with which we share Earth. This affects human well-being by interfering with crucial ecosystem services such as crop pollination and water purification and by destroying humanity’s beautiful, fascinating, and culturally important living companions. Analysis shows that current extinction rates vastly exceed natural average background rates, even when the background rate is considered to be double previous estimates and when  data on modern vertebrate extinctions are treated in the most conservative plausible way. Emphasizing that calculations very likely underestimate the severity of the extinction crisis because the aim is to place a realistic lower bound on humanity’s impact on biodiversity. Therefore, although biologists cannot say precisely how many species there are, or exactly how many have gone extinct in any time interval, it can be  confidently concluded that modern extinction rates are exceptionally high, that they are increasing, and that they suggest a mass extinction under way—the sixth of its kind in Earth’s 4.5 billion years of history.

Mass extinctions are devastating, and yet life eventually returns to normal. The rate of recovery depends on many factors, but the most important is the scale of the extinction. After most mass extinctions life recovers within a few million years. Recovery also depends on which plants and animals survive. If the mass extinction hit all groups more or less equally, as most seem to, then there is a good chance that one or two species from each major group will survive. These act as an ecological framework, occupying most of the broad niches, and so the basic ecosystem structure survives. New species evolve to fill the gaps and the recovered ecosystem may be quite comparable to the one that existed before the disaster.

In the past 500 years, humans have triggered a wave of extinction, threat, and local population declines that may be comparable in both rate and magnitude with the five previous mass extinctions of Earth’s history. Similar to other mass extinction events, the effects of this sixth extinction wave extend across taxonomic groups, but they are also selective, with some taxonomic groups and regions being particularly affected.

Species diversity ensures ecosystem resilience, giving ecological communities the scope they need to withstand stress. Thus while conservationists often justifiably focus their efforts on species-rich ecosystems like rainforests and coral reefs — which have a lot to lose — a comprehensive strategy for saving biodiversity must also include habitat types with fewer species, like grasslands, tundra, and polar seas — for which any loss could be irreversibly devastating. And while much concern over extinction focuses on globally lost species, most of biodiversity’s benefits take place at a local level, and conserving local populations is the only way to ensure genetic diversity critical for a species’ long-term survival.

Because animal loss represents a major change in biodiversity, it is likely to have important effects on ecosystem functioning. Metaanalyses of biodiversity-ecosystem function studies suggests that the impact of biodiversity losses on ecosystem functions is comparable in scale with that of other global changes (such as pollution and nutrient deposition.. The effects of defaunation appear not to be merely proximally important to the ecology of affected species and systems but also to have evolutionary consequences. Several studies have detected rapid evolutionary changes inmorphology or life history of short-lived organisms  or human-exploited species. Because defaunation of vertebrates often selects on body size, and smaller individuals are often unable to replace fully the ecological services their larger counterparts provide, there is strong potential for cascading effects that result from changing body-size distributions. Still poorly studied are the indirect evolutionary effects of defaunation on other species, not directly affected by human defaunation. For example, changes in abundance or composition of pollinators or seed dispersers can cause rapid evolution in plantmating systems and seed morphology . There is a pressing need to understand the ubiquity and importance of such evolutionary cascades.

The evidence is incontrovertible that recent extinction rates are unprecedented in human history and highly unusual in Earth’s history. Analysis emphasizes that our global society has started to destroy species of other organisms at an accelerating rate, initiating a mass extinction episode unparalleled for 65 million years. If the currently elevated extinction pace is allowed to continue, humans will soon (in as little as three human lifetimes) be deprived of many biodiversity benefits. On human time scales, this loss would be effectively permanent because in the aftermath of past mass extinctions, the living world took hundreds of thousands to millions of years to rediversify. Avoiding a true sixth mass extinction will require rapid, greatly intensified efforts to conserve already threatened species and to alleviate pressures on their populations—notably habitat loss, overexploitation for economic gain, and climate change. All of these are related to human population size and growth, which increases consumption and economic inequity. However, the window of opportunity is rapidly closing.