DISRUPTION IS UPON US, AND THERE IS NO ESCAPING IT. 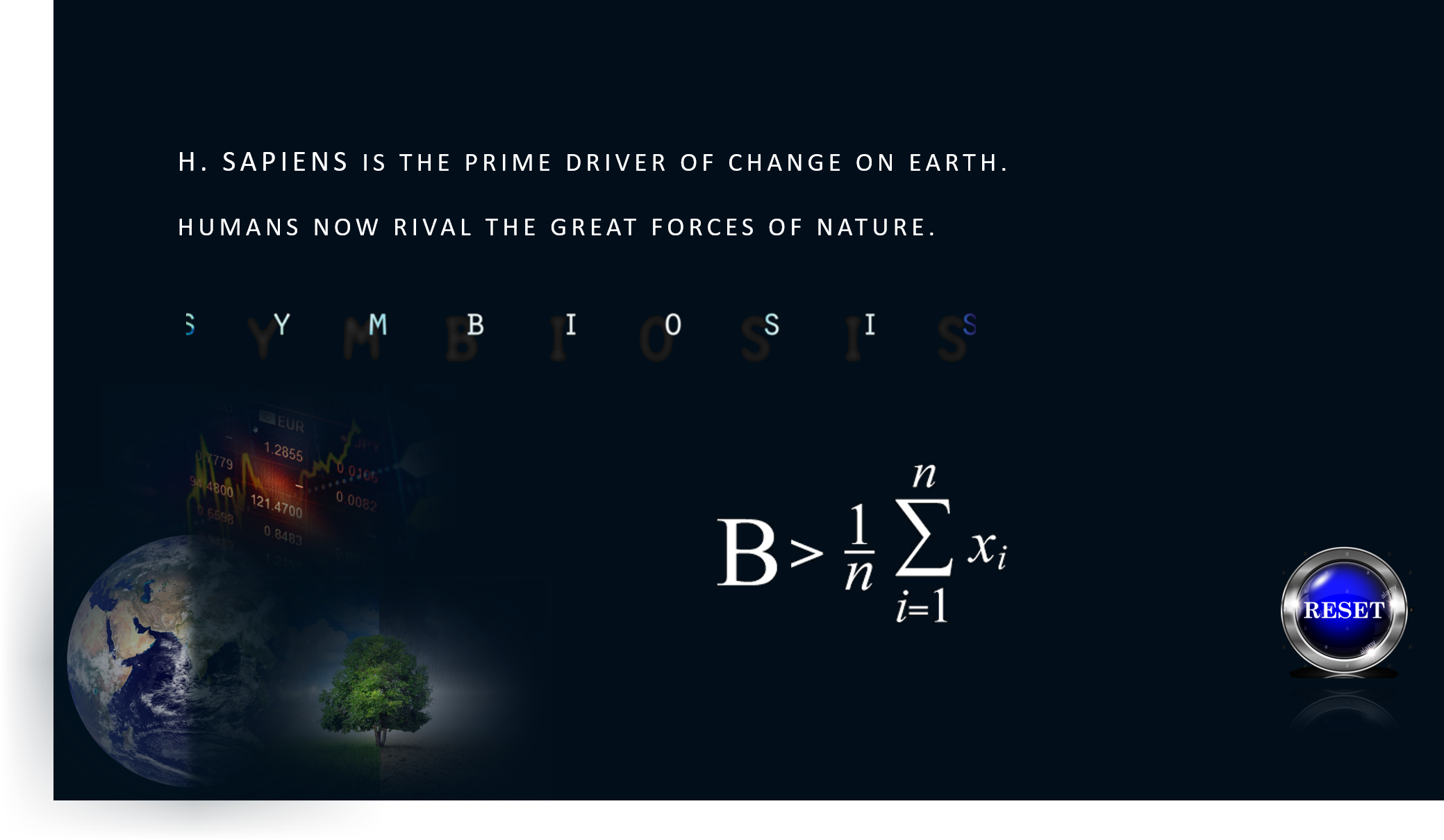 Leadership can navigate the complexities of geopolitics, the challenges of biophysical boundaries and opportunities to make sense of what is often an opaque and dynamic world.

INFINITE THINKING IN A FINITE WORLD

At the start of the industrial revolution the world was deemed a larder full to the brim of wonderful resources to be consumed. Fossil fuels such as coal/ oil and gas were perceived to be limitless, becoming the dominant form of energy used by societies that viewed nature as a resource to be utilized for progress. We inherited a 3.8-billion-year store of natural capital, but at present rates of use and degradation, there might be little left by the end of the century. Our footprint has grown so large that, in many cases, limits on the availability of natural resources now constrain real progress more than limits on capital infrastructure. We have continually developed technologies that are designed to maximize the throughput of energy and resources while minimizing monetary and labor costs, without any real consideration of the implications this may have for future generations.  We have begun appreciating just how damaging our belief in an unlimited-growth system is, and have had to swallow the bitter pill of the fact that this is only feasible in a world unconstrained by any biophysical limits, which is not the world we live in. Since the late 20th century there has been an ever-increasing awareness the assumptions underlying the modern world are flawed. We have had to appreciate that the actions of the few generally have consequences for many; most of them unpleasant.

The negotiation of the balance between technology, society and economy is at risk of being biased by Western values and dominated by the incentives of Western economies. As in the case of climate change, so also with technological disruption; the nation-state is simply the wrong framework with which to address the threat. Since research and development are not the monopoly of any one country. Current incentives often hinder the development of socially beneficial technologies which do not promise a quick return on investment or do not have large markets. By making these areas visible, we can focus attention on the question of what we really want from technologies and shape behavior towards desirable outcomes.

DISRUPTION IS UPON US, AND THERE IS NO ESCAPING IT.

Because of globalization we are recruiting more and more human brains into the task of innovation, establishing new scientific, academic and industrial complexes in places they did not exist before. This ever-increasing pool of intellect, inspiration and entrepreneurial effort has resulted in an ever-greater amount of innovation, as well as a larger quantity of consumers to procure it. It is creating a mega wave of creative destruction of which we are yet to experience.

To manage the impact, business, technological, economic, and social recalibrations need to take place to ensure things do not tip out of balance and into chaos. These recalibrations can take many forms. Some are an intrinsic part of the innovation wave’s nature, a feedback mechanism that highlights to the market that it needs to reset itself by reallocating resources away from old technologies and the companies wedded to them, and towards the creation of new innovations and new entrepreneurs. Others are the necessary economic and social adjustments as reactions to the forces of creative destruction.  These recalibrations will not be unsubstantial, for the economic model of continued growth and its measure of GDP is under attack from multiple sources. Trickle-down economics is not trickling any more, and society is rising up against the current levels of inequality, capitalism is falling out of favor, especially amongst the young who have not seen nor felt the effects of its collectivist alternatives themselves.

As with the first industrial revolution, this period will be remembered for the convergence of many disruptive technologies, a convergence that will create major economic, social and political upheaval. It will be looked upon by future generations as a time of great progress, but like the first industrial revolution it will also be remembered for having significant winners and losers, and this disparity will be a major point of contention and potentially conflict. Since the industrial revolution, the world has experienced significant and regular changes to our paradigms and major advancements in technology and scientific understanding, but the underlying economic and societal model, while recalibrated to adjust to new-wave realities, has foundationally remained the same. Our scientific knowledge is now doubling in a time frame measured in months, not decades, but our social, political and economic systems are still ultimately based on those founded in the 19th and 20th century.

We are now counting our ability to innovate our way out of trouble, to create new technological breakthroughs that allow for increased production at a lower ecological footprint to provide them with the standard of living of industrialized countries.

The liberal political system was shaped during the industrial era to manage a world of steam engines, oil refineries, and television sets. It has difficulty dealing with the ongoing convergence between infotech, nanotech, biotech and cognitive sciences that could restructure not just economies and societies but our very bodies and minds. In the past, we humans learned to control the world outside us, but we had very little control over the world inside us.

The next decades might therefore be characterized by intense rethinking and by the formulation of new economic, social and political models and even our concept of who we are and our relationship with the world around us. We have only seen a glimpse of what the new world might look like. To survive this upswing and ensure that we create another golden age and beyond, we are going to need to rethink the way we do business, rethink our relationships with technology, rethink our economic models and rethink how we structure our society and relationship with nature. Interestingly, it will also challenge the apparently self-evident truths about the very nature of life and humanity.