From Urban Complexity to predictive models. 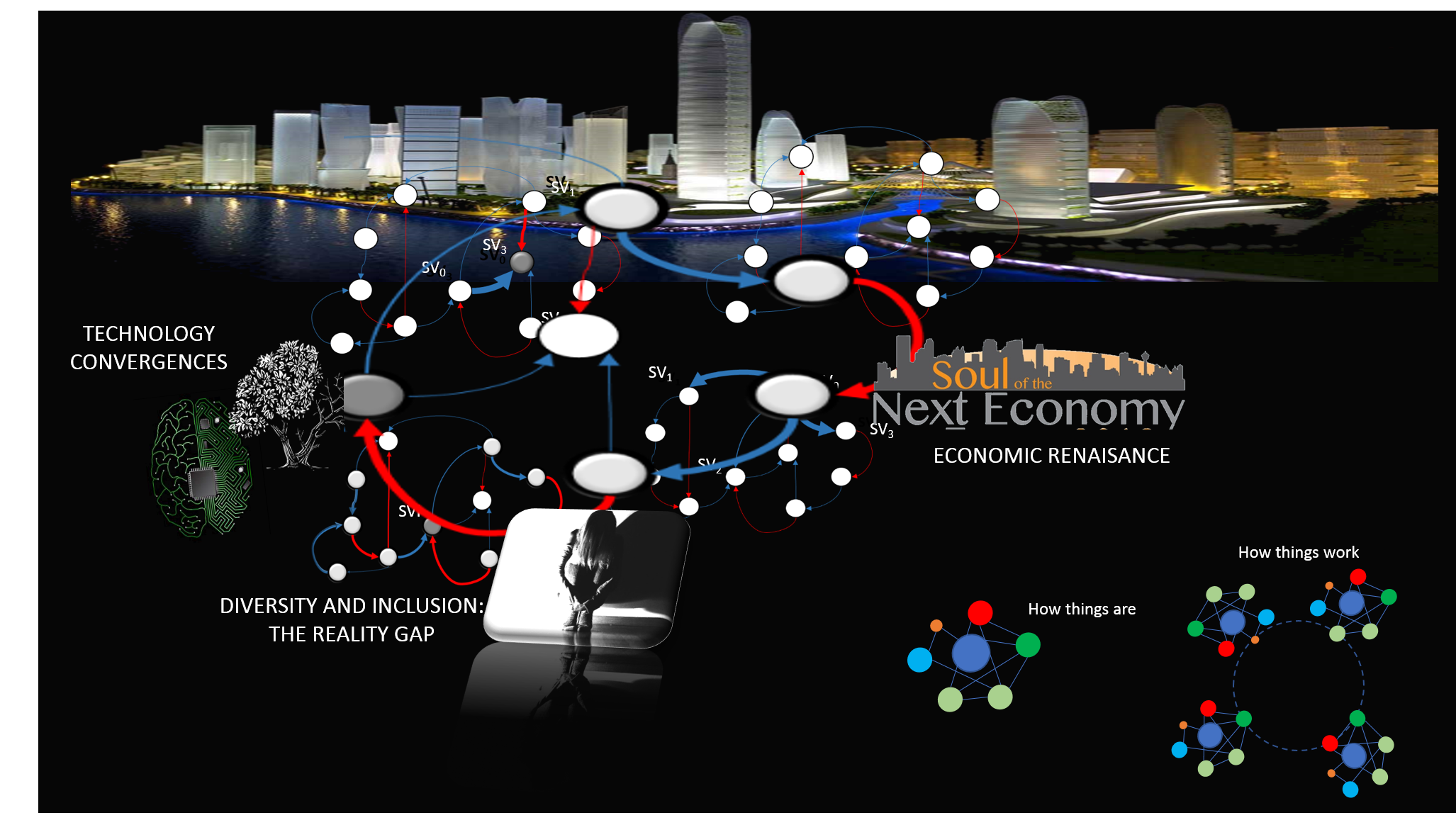 Over the past few decades an extensive literature has been published on the study of complex physical, biological and social systems. As complex systems tend to be generic and pervasive they differ from complicated  systems that are distinctive and specialized. Complex systems have some  generally accepted properties. Their structure spans several scales, constituents are interdependent and interact in  nonlinear ways. These interactions give rise to novel and emergent dynamics. The  combination of structure and emergence is viewed as self-organization.

Ecosystems and social systems are complex adaptive systems: complex because they have many parts and many connections between the parts; adaptive because their feedback structure gives them the ability to change in ways that promote survival in a fluctuating environment.

Complex systems studies range from detailed studies of specific systems, to studies of the mechanisms by which patterns of collective behaviors arise, to general studies of the principles of description and representation of complex systems. These studies are designed to enable us to understand and modify complex systems, design new ones for new functions or create contexts in which they self-organize to serve our needs without direct design or specification. The need for applications to biological, cognitive, social, information, and other engineered systems is apparent.

A city is to be understood as a human – ecosystem interaction, as dual complex adaptive systems because they are composed of material components and human components. As a set of material components alone, the city is an artifact and as such a simple system; as a set of human components – the urban agents – the city is a complex system. It is the urban agents that by means of their interaction – among themselves, with the city’s material components and with the environment – transform the artifact city into the complex artificial system city. In order for a complex -biological- system to survive and evolve there must be interplay between competition  and  co-operation  at  different  scales. Complex biological/social systems are called adaptive systems because they can  adapt to a changing environment. A small subset of adaptive complex systems are self reproducing and experience birth, growth and death.

As a dual complex adaptive system the city emerges out of the interactional activities of its agents, but once it emerges, it affects the behavior of its agents and so on in circular causality. Furthermore, because of its size, the city is a large-scale collective and complex artifact that on the one hand interacts with its environment, while on the other it is an environment for the millions of people that live and act in cities.

Artifacts are not just the outcome of human interaction; rather they are also the media of interaction. The process involves internal representations in the form of ideas, intentions, memories thoughts that originate and reside in the mind/brain of urban agents, and, on the other, external representations, that is to say artifacts such as texts, cities, buildings or roads that reside in the world.

They interact by means of the externally represented artifacts; roads, bridges, parks … buildings, neighborhoods and whole cities and metropoles.

The city is a dual complex adaptive system also in the sense that the city as a whole is a complex system and each of its agents is also a complex system. The implication is that we have to include the cognitive capability of the urban agents in the dynamics of cities.

Urgent need for a qualitative and quantitative understanding of cities.

Human civilization, its various parts, including its technology, and its environmental context, are all complex. The increasing complexity suggests that there will be a growing need for widespread understanding of complex systems as a counter point to the increasing specialization of professions and professional knowledge. The insights of complex systems research and its methodologies may become pervasive in guiding what we build, how we build it, and how we use and live with it. Possibly the most visible outcome of these developments will be an improved ability of human beings aided by technology to address complex global social and ecological/ environmental problems, third world development, poverty in developed countries, war and natural disasters.

These dual complex systems are dynamic and far from equilibrium. It is not possible to plan for an optimal future state.

For this we have to develop the ability to capture and represent specific systems, rather than just accumulate data about them. In this context: to describe relationships, know key behaviors, recognize relevance of properties to function, and to simulate dynamics and response. Furthermore to understand the interplay of behaviors at multiple scales, and between the system and its environment, connected or integrated within and across levels.

In dual complex systems it is possible to predict most preferable futures -the desired system conditions- to some degree and for some time-scales. It is important to know what qualitative structure could emerge and discuss the merits and demerits of these, since these are the choices open to the system at present. Without models that can explore the possible future structures and morphologies of the system, planning and interventions can have no predictable outcomes.

Understanding complex systems does not mean that we can predict their behavior exactly, it is not just about massive databases, or massive simulations, even though these are important tools of research in complex systems. Understanding complexity is neither about prediction or lack of predictability, but rather a qualitative and quantitative knowledge of how well we can predict, and only within this constraint, what the prediction is.