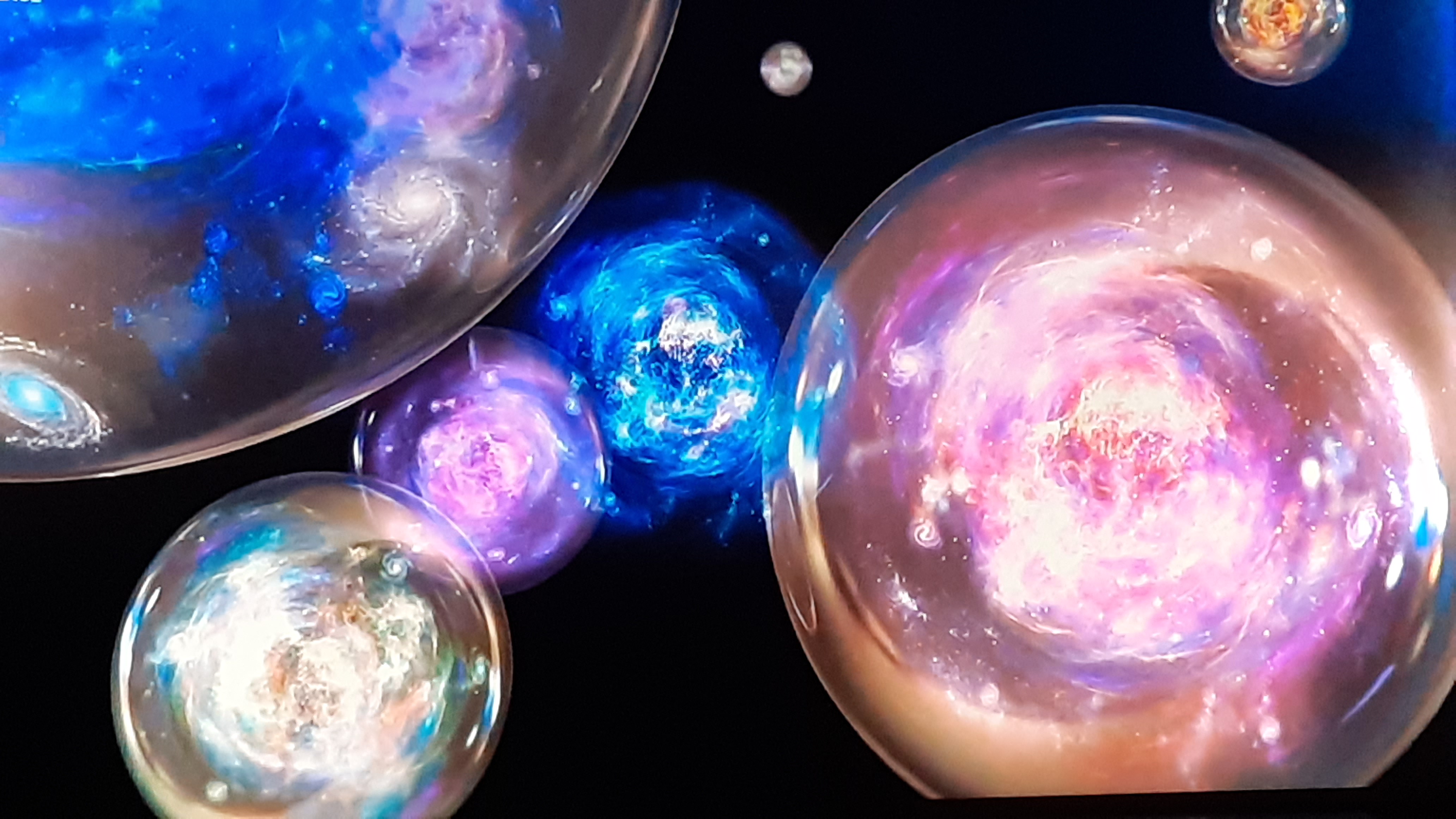 ‘What then is time? If no one asks me, I know what it is. But if I wish to explain it to him who asks the question, I do not know.’

Another year past, it seems as if time is speeding up. I’ve always been fascinated with time and the concept of time’s passage. Time seems commonplace, but it is perhaps the Universe’s greatest mystery. Throughout the history of philosophy (paradigmatically, in the work of Aristotle) time is a measure or dimension of change. If there are physical processes, it seems there is temporality. Fundamental with ‘the question of time’ is the distinction between past, present and future; why time appears to move in only one direction; and whether time is fundamental or emergent. The directionality that we observe in the macroscopic world is very real: entropy — a measure of the disorder in a system — always increases, a fact encoded in the second law of thermodynamics, a measure of disorder and the inevitably increases in the Universe. And that increase is what we experience as the flow of time.

Time as the progression of events from the past to the present into the future, a measure of non-stop, consistent change in our surrounding, usually from a specific viewpoint. Basically, if a system is unchanging, it is timeless. This description of time changed in 1905 with Albert Einstein’s theory of special relativity. While the passing of time was already known to be closely connected to space, this monumental theory was the first to combine space and time into a single field, one with measurements that vary depending on the relative motion or gravitational forces of objects within it. Basically, that means time is relative. It is a relative measurement that varies as objects move faster or slower, or as they’re subjected to more or less gravity. Time can be considered to be the fourth dimension of reality, used to describe events in three-dimensional space. Gravity curves space and time: the stronger the gravity, the more it curves space-time, and the more time slows down.

In Albert Einstein’s theory of relativity, time is woven together with the three dimensions of space, forming a bendy, four-dimensional space-time continuum — a block universe encompassing the entire past, present and future. The block universe (or eternalism in philosophical discussions), there is no basis for singling out a present time that separates the past from the future because all times coexist with equal status. As such, it has profound implications for how we view our experience of existing in the present moment, able to reflect on the past and plan new actions in a variable future. Indeed, if all times coexist with equal status, the future is as fixed as the past and so humans can only act in compliance with the future; this directly conflicts with the notion that humans can act freely. Einstein’s equations portray everything in the block universe as decided from the beginning; the initial conditions of the cosmos determine what comes later, and surprises do not occur — they only seem to.

To solve the mystery of time, we have to grapple not just with the space-time continuum of Einstein, but also with the knowledge that the universe is fundamentally quantum, ruled by chance and uncertainty. Quantum mechanics, the laws describing the probabilistic behavior of particles, paints a very different picture of time than Einstein’s theory. At the quantum scale, one can never entirely accurately predict both the position of a particle, and its momentum, at a given time. And to describe any system, we need the wavefunction – a mathematical description of the quantum state of a system, which contains all its measurable information – to handle the probabilistic nature of quantum measurements. That’s why quantum particles are mathematically expressed in a way that embraces multiple possibilities, existing in a superposition of states at the same time. When we perform a measurement, the wavefunction collapses and picks a single definite value, corresponding to what we observe: a known definite measurement. At the quantum scale, irreversible changes occur that distinguish the past from the future: a particle maintains simultaneous quantum states until you measure it, at which point the particle adopts one of the states. Time in quantum mechanics is rigid, not bendy and intertwined with the dimensions of space as in relativity. Furthermore, measurements of quantum systems make time in quantum mechanics irreversible, whereas otherwise the theory is completely reversible. this inconsistency. Mysteriously, individual measurement outcomes are random and unpredictable, even as particle behavior collectively follows statistical patterns. This apparent inconsistency between the nature of time in quantum mechanics and the way it functions in relativity has created uncertainty and confusion and underlies the struggle to find a quantum theory of gravity — a description of the quantum origin of space-time — and to understand why the Big Bang happened. Time in the world of quantum physics where waves and particles can behave the same, time tends to be much more malleable than it is in our observable realm of classical physics.

In an effort to unify quantum mechanics and gravity, researchers have long been on the hunt for a consistent theory of quantum gravity. One tempting solution is rooted in the aforementioned idea that, perhaps, the very fabric of space–time may be an emergent property of some kind of quantum entanglement; one that ultimately satisfies Einstein’s relativistic field equations.

And than there is perception of time as a fundamental element of human awareness, the subjective experience of the passage of time, or the perceived duration of events, which can differ significantly between different individuals and/or in different circumstances. Although physical time appears to be more or less objective, psychological time is subjective and potentially malleable.

We do not so much perceive time itself, but changes in or the passage of time, or what might be described as events in time. In particular, we are aware of the temporal relations between events, and we perceive events as being either simultaneous or successive. We also have a perception of the sequence or order of these events. Our sense of time seems it is not a purely automatic or innate process, but a complex activity that we develop and actively learn as we grow.

The neurological system governing the perception of time appears not to be associated with specific sensory pathways, but rather uses a highly distributed system in the brain. Time perception therefore differs from our other senses – sight, hearing, taste, smell, touch, even proprioception – since time cannot be directly perceived, and so must be reconstructed in some way by the brain. When the brain receives new information from the outside world, the raw data does not necessarily arrive in the order needed to process it properly. The brain therefore reorganizes the information and presents it in a more easily understandable form. In the case of familiar information, very little time is needed for this process, but new information requires more processing and this extra processing tends to makes time feel elongated.

But an embodied perspective of time is supported by various computational neuroscientific models that highlight the importance of the body and of bodily movements. The subjective perception of time is connected to the motor cortex whereas sensory-motor conflicts integration contributes to subjective distortion of time across different modalities. The human brain is equipped to track time. The suprachiasmatic nuclei of the brain is the region responsible for daily or circadian rhythms. But neurotransmitters and drugs affect time perceptions. Chemicals that excite neurons, so they fire more quickly than normal speed up time, while decreased neuron firing slows down time perception. Neurotransmitters such as dopamine and norepinephrine (adrenaline) are integrally involved in our perception of time, although the exact mechanism is still not well understood. The human brain appears to possess some kind of internal clock (which is linked to specific dopamine levels, or possibly even several different clocks working together but independently, each of which may dictate our time perception depending on the particular context).

We perceive time as series of events in a sequence, separate by durations of various lengths. Our experience is not limited to a single series of events, though, but we experience a plurality of overlapping events, sequences and durations. The perception of time durations is also crucially bound up with memory. It is essentially our memory of an event (and perhaps, even more specifically, our memory of the beginning and end of the event) that allows us to form a perception of, or a belief in, its duration. We infer, albeit subconsciously, the duration of an event from our memory of how far in the past something occurred, of how long ago the beginning and end of the event occurred.

Our consciousness, our ability to perceive the world around us and, ultimately, our very sense of self are shaped upon our perception of time in loop connecting memories of the past, present sensations and expectations about the future. Reconstructing the past and anticipating the future, i.e., the ability of travelling in mental time, is thought to be at the heart of consciousness and, by the same token, at the center of human cognition. This extraordinary mental activity is possible thanks to the ability of being aware of subjective time.

Past, present and future interpenetrate the mind, and therefore, we are continuously reorganizing the past, present and future, that is, forgetting, restoring and imagining events. It is the future that decides if the past is alive or dead. (…). Thus, the order of my future choices will determine the order of my past, and this order is by no means chronological (Sartre).

Going back to Saint Augustine;