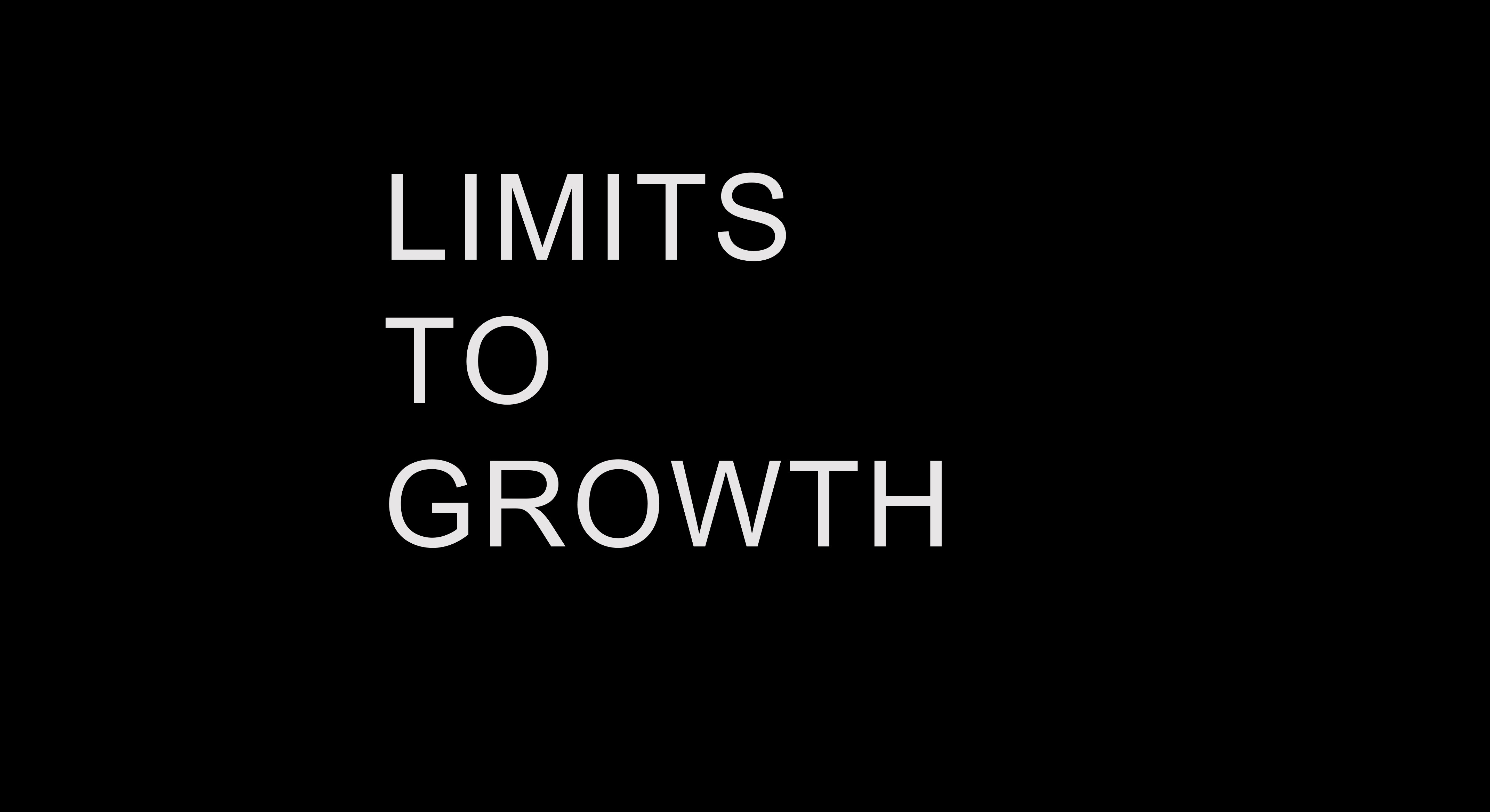 The Club of Rome concluded in Limits to Growth (1972) that if humanity kept pursuing economic growth without regard for environmental and social costs, global society would experience a sharp decline (i.e., collapse) in economic, social, and environmental conditions within the twenty-first century.

The message was clear: continuous growth in industrial output cannot be sustained indefinitely. Effectively, humanity can either choose its own limit or at some point reach an imposed limit, at which time a decline in human welfare will have become unavoidable. An often missed, but key point is the plural of limits.  In an interconnected system like our global society, a solution to one limit inevitably causes interactions with other parts of the system, giving rise to a new limit which then becomes the binding constraint to growth; interactions between objects in a system, often characterized by non-linear behavior like delays, feedback loops, and exponential growth or decline.

Nearly 50 year later we are still do not understand (or want to) that people and nature are dynamically intertwined and embedded in the biosphere, placing shocks and extreme events as part of this dynamic. In this 50-year humanity has become an even greater force in shaping the future of the Earth system as a whole. The ever-increasing scale and pace of the human dimension has accelerated climate change, rapid loss of biodiversity, growing inequalities, and loss of resilience to deal with uncertainty and unexpected disruptions.

Life in the biosphere is shaped by the global atmospheric circulation, jet streams, atmospheric rivers, water vapor and precipitation patterns, the spread of ice sheets and glaciers, soil formation, upwelling currents of coastlines, the ocean’s global conveyer belt, the distribution of the ozone layer, movements of the tectonic plates, earthquakes, and volcanic eruptions. Water serves as the bloodstream of the biosphere, and the carbon, nitrogen, and other biogeochemical cycles are essential for all life on Earth.

It is the complex adaptive interplay between living organisms, the climate, and broader Earth system processes that has evolved into a resilient biosphere. The interactions and diversity of organisms within and across the planet’s ecosystems play critical roles in the coevolution of the biosphere and the broader Earth system. The Earth system comprises a number of large-scale subsystems with so-called tipping elements (components of the Earth system, which are characterized by a threshold behavior) that can undergo large and possibly irreversible changes in response to environmental or anthropogenic perturbations once a certain critical threshold in forcing is exceeded. Once triggered, the actual tipping process depends on the respective response times of the system. When relevant aspects approach a threshold, these components can be tipped into a qualitatively different state by small external perturbations.

The threshold behavior is often based on self-reinforcing processes which, once tipped, can continue without further forcing. It is thus possible that a component of the Earth system remains ‘tipped’, even if the background climate falls back below the threshold. The transition resulting from the exceedance of a system-specific tipping point can be either abrupt or gradual.  There is a risk that additional tipping points in the Earth system might be triggered through self-reinforcing feedbacks and unleash a domino-like chain reaction: tipping cascade. Among the tipping elements are cryosphere components such as the continental ice sheets on Greenland and Antarctica; biosphere components such as the Amazon rainforest, boreal forests and coral reefs; and large-scale atmospheric and oceanic circulation patterns such as monsoon systems and the Atlantic Meridional Overturning Circulation (AMOC). With continuing global warming, it becomes more likely that critical thresholds of some tipping elements might be exceeded, possibly within this century, triggering severe consequences for ecosystems, infrastructure and human societies.

Existing as embedded within the biosphere means that the environment is not something outside the economy or society, or a driver to be accounted for when preferred, but rather the very foundation that civilizations exist within and rely upon. Social conditions, health, culture, democracy, power, justice, inequity, matters of security, and even survival is interwoven with the Earth system and its biosphere in a complex interplay of local, regional, and worldwide interactions and dependencies.

Humanity is confronted with turbulent times and with new intertwined dynamics of people and planet were fast and slow change interplay in unexperienced and unpredictable ways. Our future on our planet will be determined by our ability to keep global warming well below 20 C and foster the resilience of the living biosphere. Building resilient societies, ecosystems, and ultimately the health of the entire Earth system hinges on supporting, restoring and regenerating diversity in intertwined social and ecological dimensions. Diversity builds insurance and keeps systems resilient to changing circumstances. Clearly, nurturing resilience is of great significance in transformations towards sustainability and requires collective action on multiple fronts, action that is already being tested by increasing turbulence incurred by seemingly unrelated shocks. Equality holds communities together, and enables nations, and regions to evolve along sustainable development trajectories. Inequality, in terms of both social and natural capitals, are on the rise in the world, and need to be addressed as an integral part of our future on Earth. We are facing a rapid and significant repositioning of sustainability as the lens through which innovation, technology and development is driven and achieved. What only a few years ago was seen as a sacrifice is today creating new purposes and meanings, shaping values and culture, and is increasingly seen as a pathway to novelty, competitiveness and progress.

Emerging towards desirable futures is a learning adventure into something new and will mean a dramatic reconfiguration of our societal arrangements, through a journey into unchartered territories for which we do not have a map. Exploration of the territory is required, based on informed consensus on the facts and trade-offs on what choices we make for our relationships with nature, people and time. Even in times of misinformation and polemics.