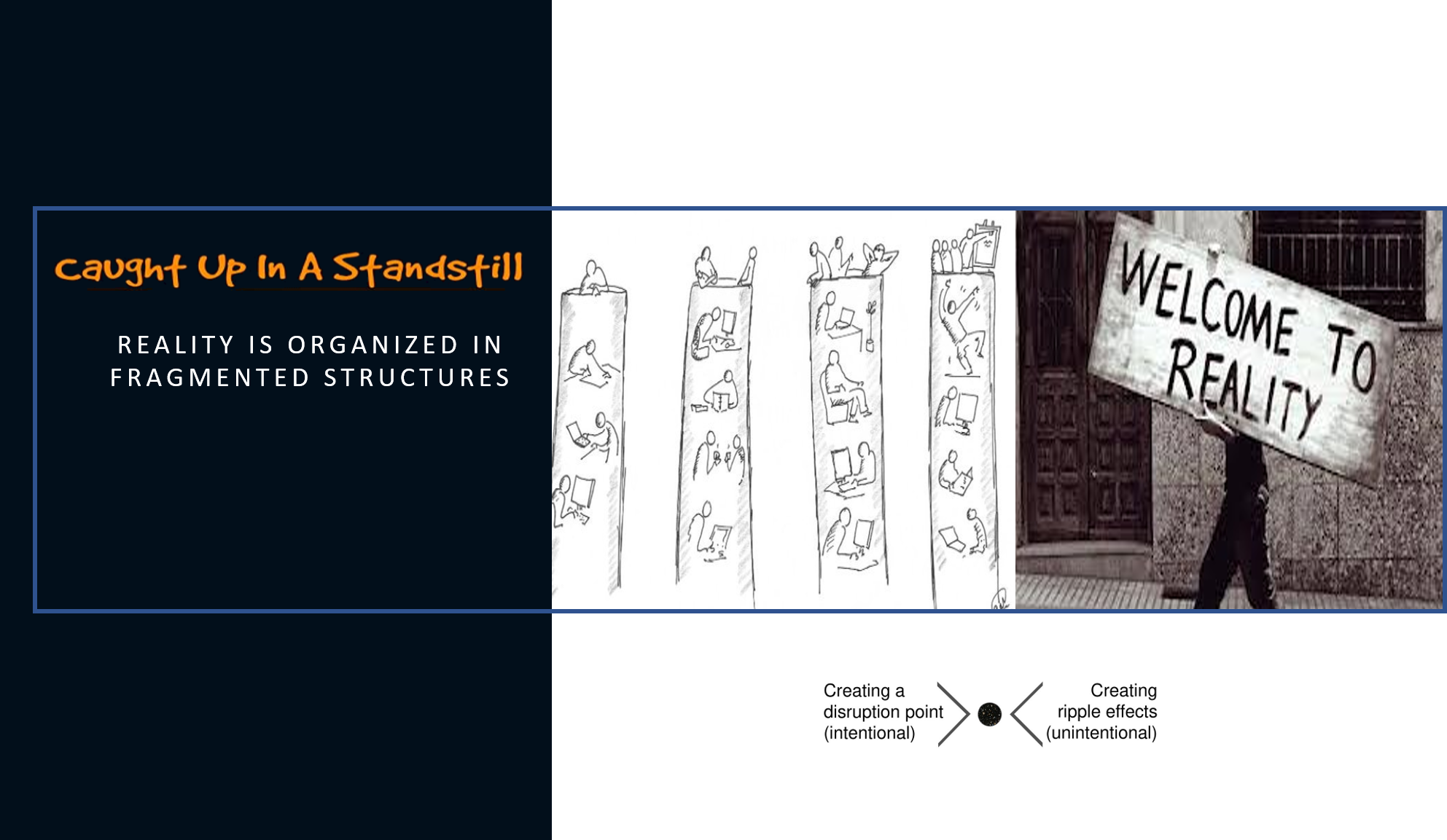 2030+: an emerging and radically transformative future that moves at a speed that most are unprepared for. The social and political systems that have lifted millions out of poverty and shaped our national and global policies for half a century are failing us.
We are confronted with changing, increasing globalization and the importance of innovation and new technologies. Innovations and technologies that will have consequences for us in areas such as cities and the built environment. And thus for our structure and culture.

The Anthropocene encapsulates a world of intertwined drivers, complex dynamic structures, emergent phenomena, and unintended consequences, manifest across different scales of analysis and subject to multiple and linked biophysical and social constraints. Yet while the concept “Anthropocene” reflects the nature, scale and magnitude of human impacts on the Earth, its societal significance lies in how it can be used to explore and guide attitudes, choices, decisions and actions that will reverberate far into the future. Humans have become key drivers and amplifiers of planetary change, influencing large-scale processes and systems, including the climate, the oceans and terrestrial ecosystems, and ultimately the functioning of the Earth System as a whole.
The intertwined and more complex socio-ecological systems are likely to exhibit more unexpected, emergent behaviors, with new risks and uncertainties. Nonetheless, current mainstream thinking tends to revolve around “business as usual” futures that emphasize continuity and predictability based on known patterns of change, rather than focusing on potential discontinuities, emergent patterns of change and plausible and desirable futures.
Despite deep and irreducible uncertainty, the notion of the Anthropocene explicitly acknowledges the role of humans in the transformation of these social–ecological systems, and recognizes that human agency will play a key role in the future. The Anthropocene thus implies a fundamental reconceptualization of the role of individual and collective human agency and its relation to structures, systems and inputs. It requires raising or reexamining many important normative, philosophical and empirical questions about human agency, as well as discussing expectations and normative positions concerning the future. This places a premium on the ability of people to produce and use the knowledge needed to define and influence trajectories of planetary development. This involves understanding not only current patterns of first and second order change in systems, but also the dynamics of non-linear and emergent future changes. Limitations in human information processing suggest the need for a careful, precautionary approach in dealing with Anthropocene challenges. But levels of precaution themselves are subjective and variable, and a function of culture, capacity and history.

POSSIBLE & PLAUSIBLE AND DESIRABLE FUTURES
In reality, there are multiple futures. And what future is happening, depends partly on us, partly on other influences; possible, probable, and preferable futures. The future is nothing that just comes at us. We have the opportunity to influence it. The future is shaped by our decisions (or non-decisions). When we look at the present, we can see that it was shaped by the decisions that we took in the past. Multiple branches of a decision tree are culminating in the Singularity of Today.
Navigating the Anthropocene requires a systematic thinking about the future, as both drivers and consequences (intended, unintended, and unanticipated) of societal actions accelerate and amplify, moving clearly away from a sustainable end. To move towards a desirable future in the Anthropocene, there have been increasing calls for wide-ranging structural change and social transformations that are both ethical and equitable, drawing attention to a diversity of philosophical, social, cultural and biological theories and approaches to human agency and the potential for individual and collective change.
Advances in science and technology must test every assumption we have about how our world works and the purpose of humans within it. The key determinant of whether we survive and thrive in this rapidly changing reality will be our capacity to let go of outdated worldviews, thoughts, beliefs, and assumptions and our ability to learn continuously about our natural world, ideas, and ways of thinking that are shaping the decade ahead.
Conceptual frameworks, models and theories of social and biophysical transitions, drawing on Complex Systems approaches, have emphasized multi-scale or multi-level dynamic explanations that open the door to considering internal dynamics as drivers of both stability and change, of increasing as well as decreasing complexity. Within these frameworks, the underlying order in a system is typically conferred from higher levels of the system, but this depends on the reproduction of actors, networks, beliefs and behaviors at lower levels. For instance, in a multi-level perspective of socio-technical systems order is sustained within regimes by technological, cognitive and institutional factors that tend to exclude alternatives, supported by stable social, cultural and constitutional factors operating at a landscape level. Structural change may come about when radically novel alternatives emerge from small-scale niches and experiments, but only at times when a dominant and stable regime becomes vulnerable.