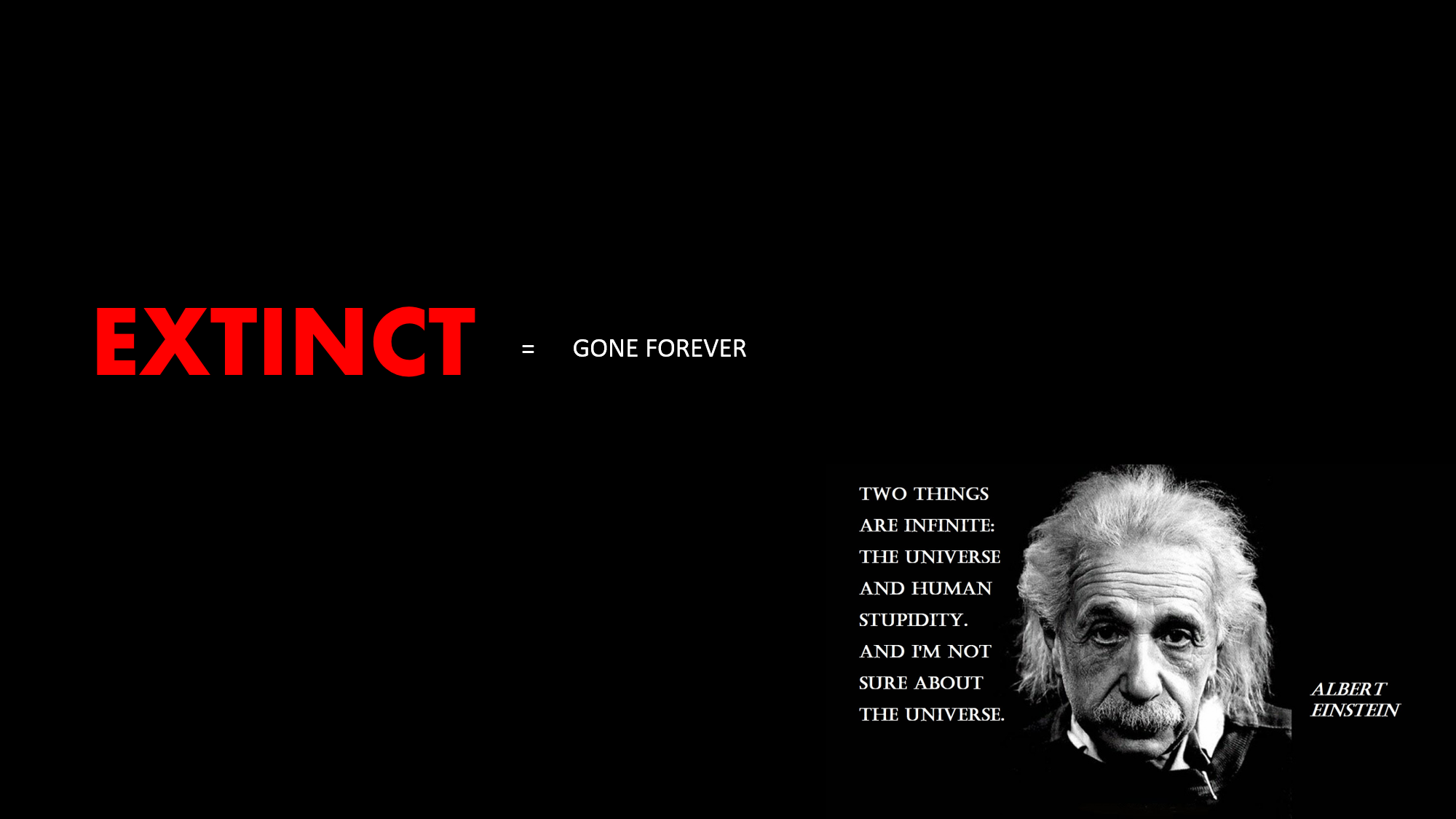 Finally, after years, it has got the attention. The sixth mass extinction. The loss of biological diversity is one of the most severe human caused global ecological problems. Hundreds of species and myriad populations are being driven to extinction every year. From the perspective of geological time, Earth’s richest biota ever is already well into a sixth mass extinction episode.

Existing ecosystems are the legacy of a biotic turnover initiated by the onset of glacial–interglacial cycles that began, 2.6 million years ago, and evolved primarily in the absence of Homo sapiens. Today, rapidly changing atmospheric conditions and warming above typical interglacial temperatures as CO2 levels continue to rise, habitat fragmentation, pollution, overfishing and overhunting, invasive species and pathogens (like chytrid fungus), and expanding human biomass are all more extreme ecological stressors than most living species have previously experienced. Without concerted mitigation efforts, such stressors will accelerate in the future and thus intensify extinction especially given the feedbacks between individual stressors.

As a species, Homo sapiens has either already arrived or will shortly arrive at a fork in the road, and the route we choose will determine what sort of world our species will occupy. One road leads to a relatively biodiverse future in which a significant majority of today’s non-domestic species persist. The other leads to a future in which the majority of today’s non-domestic species are extinct. Our species has already experienced and, to a considerable extent, contributed to a significant extinction event, so both prehistoric and historic human actions have already shaped global biology. At issue now is the extent and direction of ongoing human effects on global ecology and evolution, including the probability that our species will be a long-term or short-term component of global biological communities.

Mass extinctions shape the history of life and can be used to understand the current biodiversity crisis. The five largest mass extinctions of the Phanerozoic had profoundly different effects on the structure and function of ecosystems, although the causes of these differences are currently unclear. There is a clear need to understand the dynamics of future biodiversity loss and ecosystem change. Mass extinction, in the conservative palaeontological sense, is when extinction rates accelerate relative to origination rates such that over 75% of species disappear within a geologically short interval—typically less than 2 million years, in some cases much less. Extinction involves both rate and magnitude, which are distinct but intimately linked metrics. Rate is essentially the number of extinctions divided by the time over which the extinctions occurred. One can also derive from this a proportional rate—the fraction of species that have gone extinct per unit time. Magnitude is the percentage of species that have gone extinct. Because rate and magnitude are so intimately linked, a critical question is whether current rates would produce Big-Five-magnitude mass extinctions in the same amount of geological time that we think most Big Five extinctions spanned. The answer is yes. Current extinction rates for mammals, amphibians, birds, and reptiles if calculated over the last 500 years (a conservatively slow rate) are faster than or as fast as  all rates that would have produced the Big Five extinctions over hundreds of thousands or millions of years. This emphasizes that current extinction rates are higher than those that caused Big Five extinctions in geological time; they could be severe enough to carry extinction magnitudes to the Big Five benchmark in as little as three centuries. During times of normal background extinction, the taxa that suffer extinction most frequently are characterized by small geographic ranges and low population abundance. However, during times of mass extinction, the rules of extinction selectivity can change markedly, so that widespread, abundant taxa also go extinct. Large-bodied animals and those in certain phylogenetic groups can be particularly hard hit.

Population extinctions today are orders of magnitude more frequent than species extinctions. Population extinctions, however, are a prelude to species extinctions, so Earth’s sixth mass extinction episode has proceeded further than most assume. The massive loss of populations is already damaging the services ecosystems provide to civilization. When considering this frightening assault on the foundations of human civilization, one must never forget that Earth’s capacity to support life, including human life, has been shaped by life itself. When public mention is made of the extinction crisis, it usually focuses on a few animal species (hundreds out of millions) known to have gone extinct, and projecting many more extinctions in the future. But a deeper glance presents a much more realistic picture: they suggest that as much as 50% of the number of animal individuals that once shared Earth with us are already gone, as are huge number populations. Furthermore, this analysis is conservative, given the increasing trajectories of the drivers of extinction and their synergistic effects.

Hypotheses to explain the general phenomenon of mass extinctions have emphasized synergies between unusual events. Common features of the (Big Five) early extinctions suggest that key synergies may involve unusual climate dynamics, atmospheric composition and abnormally high-intensity ecological stressors that negatively affect many different lineages. This does not imply that random accidents like a Cretaceous asteroid impact would not cause devastating extinction on their own, only that extinction magnitude would be lower if synergistic stressors had not already primed the pump of extinction.

More rigorously formulating and testing synergy hypotheses may be especially important in assessing the sixth mass extinction potential, because once again the global stage is set for unusual interactions.

While some cosmic constants re­main, such as the cycles of day and night, the moon’s influence on the tides, the date of the solstices, and the length of time the Earth takes to go around the sun, many other patterns and rhythms of earth’s phenol­ogy are undergoing major change. Synchronicity and timing are all important; and when species tied to locked in global rhythms and patterns fails to coin­cide (trophic mismatches) death and extinction follow.

Even taking into account the difficulties of comparing the fossil and modern records, and applying conservative comparative methods that favor minimizing the differences between fossil and modern extinction metrics, there are clear indications that losing species now in the critically endangered category would propel the world to a state of mass extinction that has previously been seen only five times in about 540 million years. Additional losses of species in the endangered and vulnerable categories could accomplish the sixth mass extinction in just a few centuries. Although we cannot say precisely how many species there are, or exactly how many have gone extinct in any time interval, we can confidently conclude that modern extinction rates are exceptionally high, that they are increasing, and that they suggest a mass extinction under way.  It may be of particular concern that this extinction trajectory would play out under conditions that resemble the ‘perfect storm’ that coincided with past mass extinctions: multiple, atypical high-intensity ecological stressors, including rapid, unusual climate change and highly elevated atmospheric CO2.

Even as it has not happened yet – we are on the edge of an extinction and little disagreement that humans are driving an unprecedented ecological crisis. We are effectively undoing the beauty and the variety and the richness of the world which has taken tens of millions of years to reach. The huge difference between where we are now, and where we could easily be within a few generations, reveals the urgency of relieving the pressures that are pushing today’s species towards extinction.

From an ecological or evolutionary perspective, few events are good or bad in absolute terms: they simply favor different organisms. In some respects, the human future will be very different from the human past. For now, the full ecological and evolutionary consequences of these extinctions remain unknown, although the greater the magnitude of extinctions, the higher the likelihood that they will negatively impact human life.

Gone are the relative stability and predictability of the past twelve thousand years, as the established patterns and regularity of Holocene phenology begin to fall into chaos.

We are deciding…which evolutionary pathways will remain open and which will forever be closed.

No other creature has ever managed this, and it will unfortunately be our most enduring legacy.