The social-ecological approach humanity as an embedded part of the biosphere, depending on the generation of ecosystem services for human wellbeing, while simultaneously shaping it from local to global scales. Humanity and ecosystems are deeply linked. When considering systems of humans and nature (social-ecological systems) it is important to consider the system as a whole. The human domain and the biophysical domain are interdependent. They are complex adaptive systems that do not change in a predictable, linear, incremental fashion; they have the potential to exist in more than one kind of regime (referred to as alternate stable states) in which their function, structure, and feedbacks are different. Shocks and disturbances to these systems can drive them across a threshold into a different regime, frequently with unwelcome surprises.

At the core of the challenge we face is the inevitable uncertainty of dynamic combination human-natural systems. Rapid modifications of biophysical systems have the potential to trigger regime shifts —abrupt and irreversible changes—that will have significant consequences. It is clear that the likelihood of regime shifts is higher in ecosystems where humans have reduced resilience by modifying biogeochemical cycles, altering hydrological regimes, reducing biodiversity, and changing the magnitude, frequency, and duration of disturbance regimes. As the fastness of modern life in cities creates the definite standards for vital space, one of the most important criteria of urban quality is its functionality and the ability to anticipate and prepare for changes and potential threats. Never before have so many people been exposed to such a hyper scale of impending ecologic, social-cultural and resources dilemmas.

It all comes down to resilience, adaptability and transformability. Whereas natural ecosystems adapt to comfortably accommodate the ecological changes brought about by the planet’s essential operating mechanisms, our social-technical systems are, on the whole, created either on the assumption that such events will not occur or that when they do we can divert the impacts.

Resilience thinking provides a framework for viewing a social-eco-logical system as one system operating over many linked scales of time and space. Its focus is on how the system 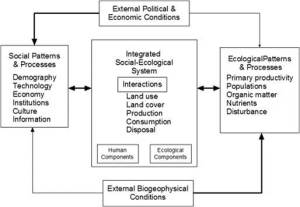 changes and copes with disturbance. Resilience thinking is about complex dynamics, how periods of gradual changes interact with abrupt changes, and the capacity to adapt or even transform into new development pathways. This is also the fundamental reason why to adopt the resilience-thinking framework is a necessity for governance. The resilience perspective shifts policies from those that aspire to control change in systems assumed to be stable, to managing the capacity of social–ecological systems to cope with, adapt to, and shape change. Managing for resilience enhances the likelihood of sustaining desirable pathways for development, particularly in changing environments where the future is unpredictable and surprise is likely. Resilience determines the persistence of relationships within a system and is a measure of the ability of these systems to absorb changes of state variables, driving variables, and parameters, and still persist. In this definition resilience is the property of the system and persistence or probability of extinction is the result. Resilience has three crucial characteristics: (1) the amount of disturbance a system can absorb and still remain within the same state or domain of attraction; (2) the degree to which the system is capable of self-organization; and (3) the ability to build and increase the capacity for learning and adaptation. This more ecological concept of resilience is not only about bouncing back and recovery but also about the ability to adapt, often discussed as adaptive capacity. In this context resilience is the capacity of a system to experience shocks while retaining function, structure, feedbacks and, therefore, identity. This definition or understanding of social-ecological resilience that moves beyond recovery and rebuilding following disturbance.
Four interactive crucial aspects for adaptive capacity are suggested: (1) to build knowledge and understanding of resource and ecosystem dynamics; (2) to feed ecological knowledge into adaptive management practices; (3) to support flexible institutions and multilevel governance systems; and,(4) to deal with external perturbations, uncertainty, and surprise. Therefore, nine values toward a ‘resilient world’ are also suggested: diversity, ecological variability, modularity, acknowledging slow variables, tight feedbacks, social capital, innovation, overlap in governance, ecosystem services. In other words, resilience is the capacity to change in order to maintain the same identity. In addition, the concept of resilience in relation to social–ecological systems incorporates the idea of adaptation, learning and self-organization in addition to the general ability to persist disturbance. This process of innovation involves stimulating an urban change of structure or dynamics which perform better. Cities must have the capacity to realize incremental adjustments (adaptations), but also, they must seed their capacity to transform. Under normal circumstances, cities usually avoid vulnerabilities leading to those incremental changes in their structure which can eventually lead to spontaneous and self-generating processes leading to transformations in the end.

Resilience and transformation may sometimes be common but they may also be different: resilience is, by definition, inward-directed, centripetal, pursuing the maintenance of an existing system’s identity, feedbacks, structure, and functions. Our current societies also requires accidental or deliberate outwardness, centrifugal thinking, trajectories toward outside the box. Changing the frame to transformability, that can create centrifugal momentum. Transformability refers to fundamentally altering the nature of a system, defining and creating and introducing new components and ways of making a living, thereby changing the state variables, and often the scale, that define the system. Configuring a new or evolving system means introducing new state variables – the attributes and processes that determine the qualitative character of the system.

The world is dynamic, and change is ubiquitous. Cities, as prototypical complex adaptive systems, are not only dynamic but also self-organizing and actively adjusting to cope with change. These changes include a myriad of disturbances, some of which are known and predictable, but most of which are unforeseen and unpredictable. For example urban design can play a critically important role in the self- organization and adaptive progression of cities. How urban design affects urban sustainability, however, depends heavily on design principles that are increasingly influenced by ecological theory. The traditional equilibrium paradigm in ecology presumes homogeneity, predictability, and inherent stability of ecosystems, suggesting that the focus of sustaining a system should be on keeping it at stasis. In sharp contrast, the hierarchical patch dynamics paradigm explicitly recognizes heterogeneity, nonlinearity, and multiple stable states, suggesting ‘flux of nature’. The ideas of heterogeneity, non-linearity, hierarchy, and multiple stable states are also essential in the theory of ecological resilience, which has emerged as a major approach to understanding and managing social-ecological systems, including urban development.

NO UNIVERSAL MODEL, nevertheless, some the features of ‘a resilient world’: 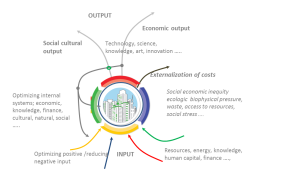 Diversity: Promoting diversity in all its dimensions, from biological to economic, and encourage multiple components and resource uses to balance and complement homogenizing trends.

Ecological variability: Seeking to understand and work with the boundaries of the inherent variability of ecological and socio-ecological systems; attempting to tame such variability is often a recipe for disaster.

Modularity: Maintaining modularity can help hedge against dangers of low resilience caused by over-connectedness in system structure and function.

Acknowledging slow variables: Managing for resilience means understanding the ‘slow’ or controlling variables that underpin the condition of a system, especially in relation to thresholds. By recognizing the importance of these critical variables, we can better avoid shifts to undesirable stable states and possibly enhance the capacity of a desirable regime to deal with disturbances.

Tight feedbacks: Tightening or maintaining the strength of feedback loops allows us to better detect thresholds. The weakening of feedback loops can result in an asymmetry between our actions and the consequences stemming from them. Salient examples of such dynamics include pollution and overconsumption.

Social capital: Promoting trust, social networks, and leadership to enhance the adaptive capacity for better dealing with the effects of disturbance.

Innovation: Embracing change through learning, experimentation, and promoting locally developed rules. Instead of narrowing our range of activities and opportunities, we should be seeking to explore and cultivate new ones.