We possess the skills, resources, and innovative capacity to create many possible futures. 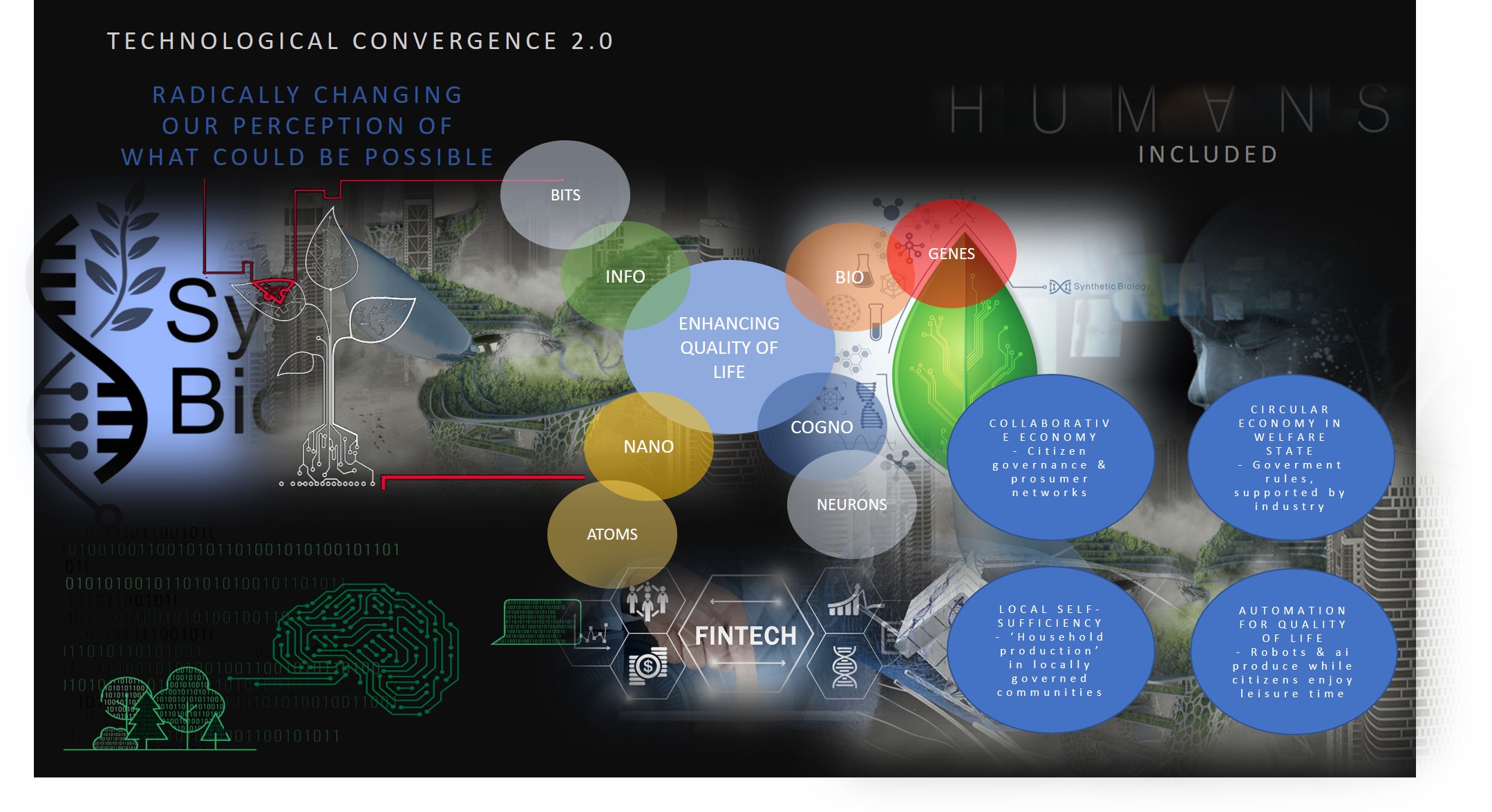 Today, there are increasing signs that the biosphere as a whole is affected in its regulation of biological and geophysical processes by the current scale of human activities. As society has moved from a relatively ‘empty world’ in which human activity was small relative to overall planetary processes to a relatively ‘full world’ in which human activity dominates the planet, an exclusive emphasis on economic growth could produce serious, and possibly irreversible, ecological damage. At the same time, overall economic growth has failed to bring wealth and improvements in well-being to many around the globe.

The industrial society of today, characterized by mass production, mass consumption and mass government, is in many ways a complex incarnation of the technologies of the 20th century. But there is no doubt that the profound change in political, economic and social structures has provided the conditions to enable the transition to a new paradigm.

The Circular Green Growth Economy is a regenerative economic model which and has the potential to help companies and societies create more value while reducing their dependence on scarce resources and operating within biophysical boundaries.

The current economic system is linear and based on the rapid use, disposal, and replacement of goods and is poorly prepared to deal with unexpected events such as, for example, climate change, and its impacts. Cooperative ownership challenges the ‘standard’, instead allowing a group to own and democratically operate resources. Cooperative and community-based ownership structures can be used for business, for agriculture, energy production and distribution, and for housing.

Circular Green Growth Economy is a Bifurcation. It is radically embodying new practices and models for value exchange and altering the existing economic system.

Bifurcation allows for the system to correct itself, it allows for a dynamic stability.

The interaction between the evolution of technology and the development of economy and society has always been an important dimension of human history.

The relationship between technology on the one hand and economy and society on the other is not uni-directional. Not only does technological progress result in the continuous change of economic and social structures, but the latter, including the evolution of attitudes and values, has at the same time a major impact on the direction and the speed of technology development.

There will also be major implications for social organization — in private life, business and government. The advanced power of computing, coupled with low cost telecommunications, may lead to new kinds of communities — both real and virtual. Easy access to interactive global networks together with further simplification of computer use, will enhance the spread of today’s embryonic “cyber” communities. In business, there may be a strong tendency towards bi-polarization of company structures — a trend towards very big global players on the one side, and very small, highly specialized companies on the other. In business and government, many foresee the end of the traditional hierarchical command and control structures. These may be increasingly replaced by horizontal networks and co-operative teams, providing members with greater freedom and responsibility in decision-making. All this will increase efficiency further, but at the same time, will provide scope for growing diversity, for greater individual choice and for many new opportunities for people’s self-determination and self-fulfillment.

But technological advances do not necessarily benefit everyone, let alone all workers. The majority of adults in industrialized countries are currently able to escape poverty by working in paid employment. But this state of affairs is excep­tional and should not be taken for granted.

Spectacular advances in computing and communications, robotics, AI, and manufacturing processes are reshaping industries as diverse as insurance, retail, healthcare, manu­facturing, and logistics and transportation. But there are substantial time lags, often on the scale of decades, from the birth of an invention to its broad commercialization, assimilation into business processes, widespread adop­tion, and impacts on the workforce. Examples of this incremental pace of change in the adoption of novel industrial robots in small and medium-sized firms, and in the still-imminent large-scale deployments of autonomous vehicles. Indeed, the most profound labor market effects of new technology are less due to robot­ics and AI than to the continuing diffusion of decades-old (though much improved) technologies of the internet, mobile and cloud computing, and mobile phones. This time scale of change provides the opportunity to craft policies, develop skills, and investments to constructively shape the trajectory of change toward the greatest social and economic benefit.

Investments in innovation grow the economic pie, which is crucial to meeting challenges posed by a globalized and fiercely technologically competitive world economy.  Technologies that are a direct result of investment in research and development over the past century and longer: the internet, advanced semiconductors, artificial intelligence, robotics, and autonomous vehicles, to name but a few. These new goods and services generate new industries and occu­pations that demand new skills and offer new earnings opportunities. An environment of supporting innovations that inventors, entrepreneurs, and creative capital deploy to support and create new businesses. We must foster and grow the innovation system to ensure that when workers are displaced by technological change, they can move to new jobs in new industries. Simultane­ously, we can shape the direction of innovation through public investment and policy to maximize these benefits.

Adopting new technology creates winners and losers and will continue to do so. Involvement of all stakehold­ers — including workers, businesses, investors, educational and social organizations, and government — can minimize the damage done to individuals and communities and help ensure that the jobs of the future offer benefits that are shared by all. This inclusive approach demands changing the institutional frameworks around work, including how education and training programs can be made more effective and inclusive, as well as new ways of empowering workers who may never have the protections afforded by traditional union structures.

We must first invest in workers and their skills, bringing to bear the full weight of modern teaching methods and training technology, as well as new institutions, to help them drive the jobs of the future. Simultaneously, we must improve the systems that employ them, the laws that protect and support them, and the jobs that we are training them to do. And we need to continue innovating, both in the institutional structures of our labor markets and in the technologies and new industries that create new jobs.