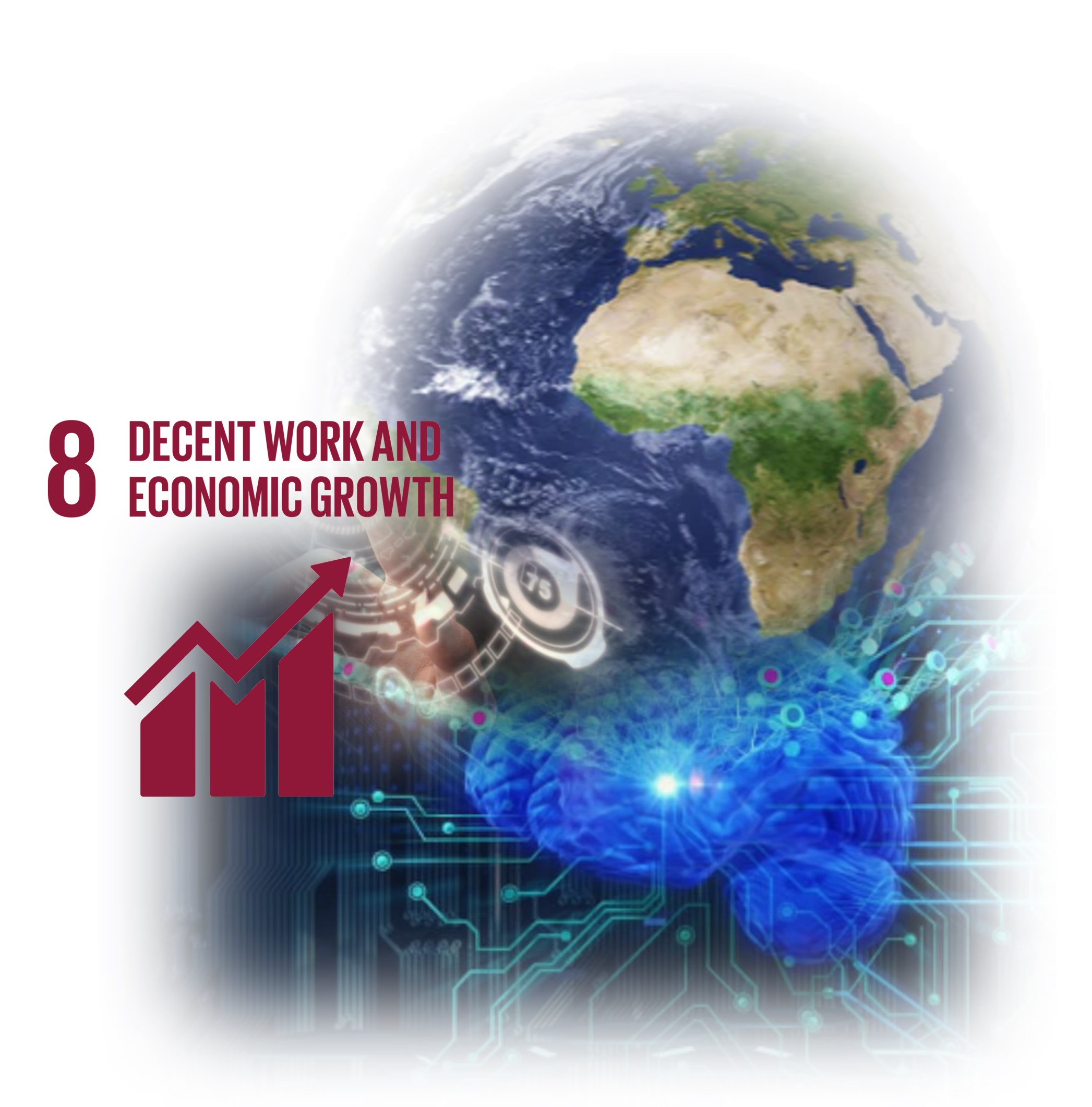 Sophisticated machines are fast outpacing jobs. What does this mean for the future of work? And if there are no jobs, what we will do with our time?

When a great number of factors congeal and the future of a complex system is dependent on a multiplicity of actors, there is never only one possible future. We need to take account of a plethora of changes that intermesh – from demographics to the possibility of sustained major migratory movements (associated with security, war, and conflict and destined in future to be increasingly caused by the fall-out effects of climate change) and globalization (which exacerbates still further the rapid spatial shifting through digitization and automation). Other factors cited in the global context are security /data security  as a possible disruptor of the expected course of development and a particular focus on bio-terrorism; political instability; decentralization and a worldwide switch to renewable energy sources; a shift of values towards a non-materialists outlook; and a massive increase in life expectancy and the productive and intellectually active period of life.

Environmental pressures and widening inequality could lead to changes in how we perceive the relationship between economic growth and the environment, which could trigger a new economic paradigm shift towards a post-growth system. Also, the role of technology would expand in our daily living, with increased options in sustainable technologies in urban infrastructure and non-human entities entering our lives, which would provide a new platform from which to ponder the meaning of being human.

Since the major systems are so rigid and resistant to change that they themselves are scarcely capable of effecting rapid change, they are already out of step with the present-day rate of change and are completely incapable of realizing the necessary speed what trailblazing transformative technologies are offering.

There is no way round the technological transformation: robotics, artificial intelligence and technology convergence are what drives development. The central driver of transformation is rapid continuing technological progress under the banner of digitization which encompasses nearly all professional groups and whose pace is likely to accelerate still further.

Robotics, convergence and synergies between various technologies, and artificial intelligence were cited as the main drivers of rapidly rising unemployment, directly followed by the problematic issue of the failure of further training and education to keep pace with the speed of technological change. At the same time, the key technological developments were identified as 3D printing in all fields of production, networked production (“Industry 4.0”), digitization and networking, and the technological enhancement of the human-machine interface through to brain-to-brain interfaces and self-replicating robotics

There are concerns that increasing instability due to the withdrawal of social safety nets and uncertainty over employment due to automation would develop a survivalist atmosphere of anxiety that would provoke nationalist tendencies. Moreover, there would be widening inequality, which could have especially critical implications for the youth population. Poverty and inequality would widen under the current socioeconomic structure, and the changing landscape in employment due to automation will only worsen this inequality. Also, governments and other organizations would have to cope with a fast-changing world both in structure and decision-making processes due to the ever-accelerating rate of technological development and innovation. Against this backdrop of a volatile and globally networked world economy in interplay with accelerated technological development, we have te fundamentally change our concept and definition of the economy so that these include all kinds of value-added performance;  a totally new orientation for society and an economy based on individual self-fulfillment, the common good and self-actualization: a re-localized and highly networked closed loop economy, a switch to self-sufficiency, a move away from consumerism. An economy to which social systems will have to change and adapt, and where the principle of wage labor might well become completely obsolete.

Will technology kill jobs and aggravate inequality, or bring in more significant work and healthier societies? Now the age of smart machines is upon us, and the application of artificial intelligence to work—especially the repetitive tasks almost all workers do to a greater or lesser extent—will put more pressure on traditional job functions. The essence of this paradigm shift is the transformation of all business processes within an organization–whether related to breakthrough innovation, everyday customer service, or personal productivity habits. As humans and smart machines collaborate ever more closely, work processes become more fluid and adaptive, enabling companies to change them on the fly–or to completely reimagine them.

These advanced technologies will create new jobs, which will need new sets of skills, some not even known.  Automation and AI will accelerate the shift in skills that the workforce needs. Work is increasingly more cognitively complex, more collaborative, more dependent on technological competence, more mobile and less dependent on geography. The platformisation of work is a major transformation on the labour market: from hiring local staff to reaching remote workers, standard employment is increasingly supplemented or substituted by temporary work, from continuous/permanent employment towards project-based (casual), from single employer towards multiple concurrent clients.

Changes due to the large-scale replacement of human labor by automation are the critical factor for the nature of work and employment. New work patterns emerge; work is increasingly flexible, decentralised, and knowledge-based, driven by self-fulfilment and increasing entrepreneurial spirit. Digital and socio-emotional skills are increasingly necessary to thrive in the new world of work.

Technology advances with dizzying speed, human workers face an ever-increasing threat of obsolescence. But we can—and must—rise to this challenge by preparing to work alongside smart machines doing that which only humans can: thinking critically, reasoning ethically, interacting interpersonally, and serving others with empathy.

The social consequences of the loss of purpose and meaning through work have been greater isolation and loneliness and less social cohesion, a trend that has accelerated. The work/leisure meaning and balance are changing, driven by priority to self-fulfillment and an increasing entrepreneurial spirit, moving towards self-actualization economy. And so the meaning of ‘the workplace’ is changing. It does not relate only to a physical place where work is performed but also includes ‘any space’.

For objective wellbeing, less work could lead to increased leisure time and flexibility over time use. This would only yield positive outcomes if benefits from automation are fairly distributed to all people in society. One example to explore is allocating a basic income for everyone in society. On subjective wellbeing, lack of social security measures could increase stress levels due to instability and uncertainty. Analysis shows there would be a need for people to have an alternative identity beyond work, and that education would be based on more than training to contribute to the economy. New non-economic means of meaningful engagement in society and education would be part of a new definition of wellbeing.

Our understanding of employment will change from the ground upwards – from something that you have to do in order to survive or live decently to something you do voluntarily to get a feeling of self-worth or more luxuries.

Even today work is mobile and multi-local; tomorrow it will be virtual and take place in the metaverse (the collective virtual space). Employers are lagging behind this development. The pace of transformation is likely to quicken even further yet to date employers and employment regulations have been incapable of keeping abreast of it.

The transformation phase will see a decrease in the number of fixed employment contracts and an increase in the number of people working on a freelance or self-employed basis, and that the form and content of work will change more quickly than it does today and has done over the past decades. Even today the notion of training for a particular profession which you follow for the rest of your life as an employee with all the benefits of social security in a normal employment relationship with one or two employers is largely discredited. This means that the educational institutions which provide the training for such a trajectory will in the long-term themselves be rendered obsolete, at least in their present form. We have to prepare for patchwork careers, more frequent switches of job, life-long learning, switches from one form of work to another (such as a change from a fixed contract form of employment to self-employment and back again). A major part of knowledge-based work will take place in projects and in teams of changing composition which increasingly come together in virtual space and derive their membership from across the globe. Learning will thus become an integral part of work as work and learning fuse together.

The identified consequences of such transformation will be the demise of hierarchal management culture, the possibility of flexible and location-independent forms of work, a culture of cooperation and self-organized collaboration in increasingly virtual teams and a rapid rise in the relevance of new forms of self-determined learning.

Individual people move ahead while the overstrained education system must revolutionize itself and move in the direction of self-managed learning portfolios. Occupational training and education have not (thus far) kept pace with the speed of technological change whilst individuals have long been living out new forms of learning and working.  Basic technological skills in dealing with technology, the understanding and controlling technology, are becoming decisive.

The meta-skills which support adaption to rapid change and navigation in volatile employment are becoming relevant in changing markets and environments. Skills which are relevant in a broad range of different fields, and which become even more important when professions themselves are subject to rapid change. They include, for instance, the ability to deliver results in unstructured working environments – where the goal being worked towards frequently changes, where the path leading to results is not clearly defined, and where no predefined methods underpinning the way forward are given. The autonomous creation of functioning structures in such a setting will be one of the abilities that must be taught in the new education system under meta-skills.

The present framework fails to do justice to today’s working biographies, let alone those of the future and, considering the pressure of demographic change, a social, healthcare and pension system based on salaried employment will no longer pay off in the future in its present form but will totter even more than it is doing today, and in the worst case completely collapse. Future work thus needs new framework conditions which offer people on the one hand freedom and autonomy, and on the other security, and which optimally recognize not just the usual material or economic contributions people make but also the ethical and social ones.

We should first expect a transformational phase stretching over the next ten years. This is where the previous transformation of work in the sense of digital Darwinism continues as more and more professional groups and activities are replaced by automation. This will be followed by the transition to a completely new system of working and running the economy to which social systems will have to change and adapt, and where the principle of wage labor might well become completely obsolete.